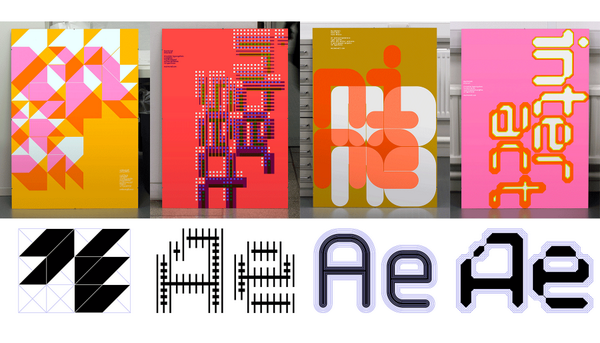 Hamish Muir is a world renown graphic designer and and influential typographer from England. He has designed and created highly structured geometrical typefaces inspired by Swiss design. Muir is co-founder of 8vo, a graphic design studio in London that specialised in identity, print, publishing, packaging and information design. A year after 8vo was created, a typographic magazine called ‘Octavo’ was published.  “Octavo” became an international journal of typography that was known for it’s overt graphic experimentation.

Working in collaboration with artist Paul McNeil, he formed “MuirMcNeal” a creative studio that focuses on parametric designs and solutions to visual communication problems. Muir treats typography as a visual language and a means to communicate creatively without the addition of pictures or illustrations. The concept is distinctive, especially in the way of deliberate illegibility of the layout and crowding of the words. 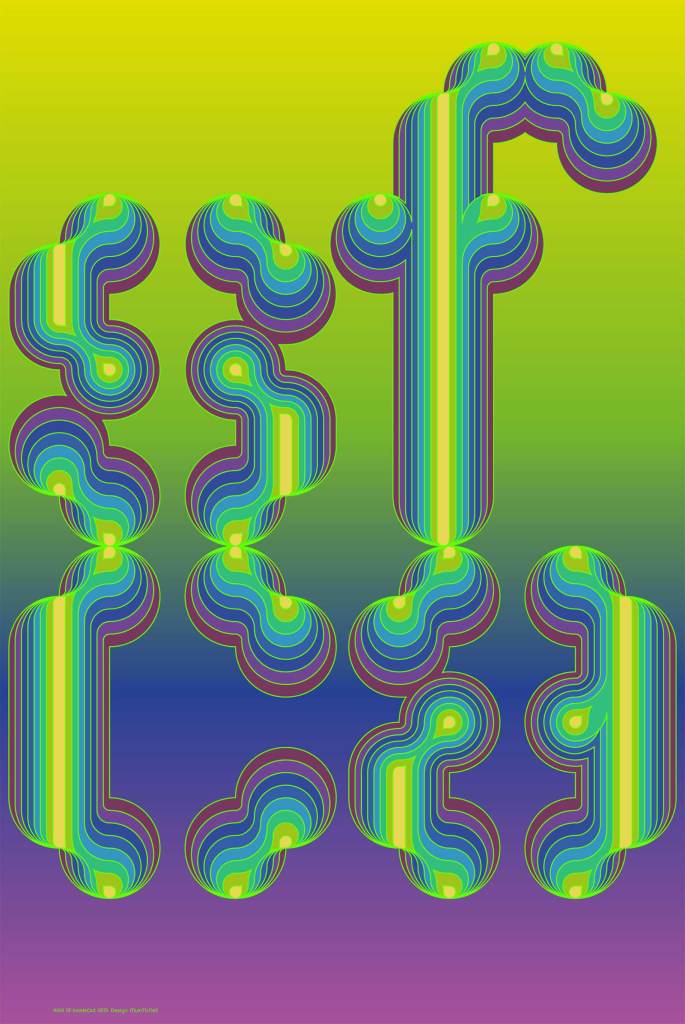 MuirMcNeil have been reinventing concepts within ‘parametric type’ design, presenting it in a way that challenges the user to interact with the work and build upon its limitations. Muir reveals the aesthetic and ideological thinking behind typography where designers are turning typographic tradition on its head and pushing experimentation into the mainstream.

“This is how I entered the world of type design as well, learning from the genius of Wim Crouwel and other greats. What I love about their work is that they use process-based design and execute it with pure skill.”

ThreeSix is a system of six optical/geometric typefaces designed and written by MuirMcNeil. You can read more about ThreeSix here. 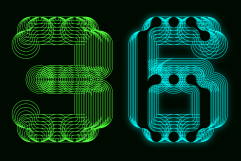 There is now more freedom than ever before to create typographic expression that goes beyond the mere graphic presentation of text. Much of Muir’s work consists of LED/LCD-inspired type that is pixelish with 3d geometrical layers. 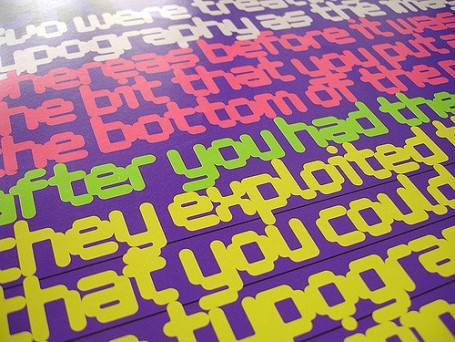 “I prefer working with type over image or other media because of its direct connection to language, it’s an extension of writing and in that sense one can give things voice and tone in a direct way without the layered meanings that using image introduces.” – Muir

Ellen Lupton the author of the well known book Thinking with Type, a guide to typography used worldwide as a reference and text book by students, designers and educators.

Born in Philadelphia, Pennsylvania in 1963, Ellen went on to study an art major at Cooper Union College in 1981. She was offered a position at the Cooper Union Herb Lubalin Study Center of Design and Typography. By accepting this position, Ellen took her love of typography, writing, and design and combined them all together throughout her career.

Ellen primarily bases her designs on typography and implements type on a communicative level with much of her creation of type following The Bauhaus design techniques. As she states in her book Graphic Design: the new basics, the Bauhaus and other schools analyzed form in terms of basic geometric elements. She is also an educator while being the director of the Graphic Design MFA program at Maryland Institute College of Art (MICA) in Baltimore.

Throughout her career Ellen has produced numerous exhibitions and books. Some of these include Mechanical Brides: Women and Machines from Home to Office (1993), Mixing Messages: Graphic Design and Contemporary Culture (1996), Letters from the Avant-Garde (1996), and Skin: Surface, Substance + Design (2002), and her famous book Thinking with Type (2004, 2010) and D.I.Y.: Design It Yourself (2006), co-authored with her graduate students at MICA. 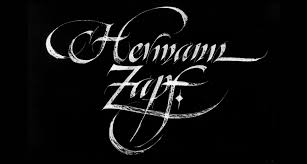 Hermann reasoned that “ Lettering must communicate a text to the reader by the harmony of their proportions, the grouping of their lines and the balance of their contrasts”

Hermann Zapf, whose calling in life — “to create beautiful letters,”found expression in lush, steady-handed calligraphy and in subtly inventive typefaces that have brought words to readers on paper, on signposts, on monuments and on computer screens for more than half a century.

In 1934, Zapf began his four-year apprenticeship in February 1934 as a retoucher.

In 1935, Zapf attended an exhibition in Nuremberg in honor of the late typographer Rudolf Koch. This exhibition gave him his first interest in lettering. Zapf bought two books there, using them to teach himself calligraphy. He also studied examples of calligraphy in the Nuremberg city library. His master noticed his expertise in calligraphy and Zapf’s work shifted to retouching lettering and improving his colleagues’ retouching.

Among the pioneers of computerised typography, Zapf led a design program at the Rochester Institute of Technology. Whilst collaborating with computer scientists, he became acquainted with IBM and Xerox. Zaph invented a typesetting program called Hz-program which later became a basis for the publishing software Adobe Indesign.

Together with Herb Kubalin and Aaron Burns, the founders of the International Typeface Corporation, Hermann Zaph built the company Design Processing International Inc in New York. Their goal was to develop programs for typographic structures that could be operated by non-specialists. The company existed until 1986. After the death of Lubalin, Zaph founded Zaph, Burns and Company in 1987, which existed until 1991.

In the 70s Zaph designed Zaph Dingbats which of course is famous still today. Typefaces he designed include Palatino, Optima and Zaphino

In an article by the New York Times, Mr kelly writes ; “What Michelangelo was to sculpture and Beethoven was to music, that’s what Hermann Zapf was to type design and calligraphy. ”

Bruce Weber, also from the New York times wrote ” Mr. Zapf evoked beauty as well as clarity, cleverness without hubris, invention without distraction. A master calligrapher who could reproduce a typeface by hand, he brought an admiration of the art of the pen to the art of the font. Conscious of history, he felt that type should both acknowledge tradition and reflect modernity.” 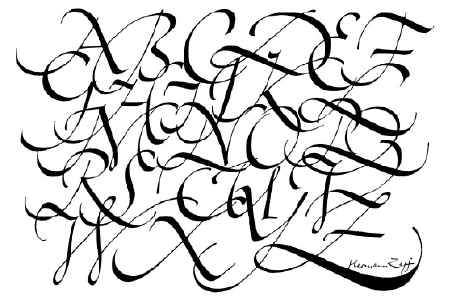 Is a freelance creative, art director, illustrator, designer and typographer living on the northern beaches of Sydney, Australia.

He loves that the same word, passage or even letter can be treated in a bunch of different ways and embody entirely different meanings… That and through subtleties like a slight shift in line weight, the elongation of a tail or the arc you use, a letter can go from contemporary to traditional or happy to sad in a single stroke…

Baltimore Magazine asked Luke to create an illustrative cover lettering style for their special 40th anniversary edition. The brief was to create something celebratory with retro design cues from its birth era.

He was commissioned by McCann Sydney to develop some custom typography and illustrations for a print and OOH campaign for Twinings – English Breakfast tea. The brief was to draw on the design cues in the swirly swashes contained on the inside of the lid of the packaging and create lettering and breakfast illustration from a similar style bursting from the pack in the brand colours.

He was commissioned by Gas As Interface in Japan to create some illustrative and expressive typography and lettering for the International fashion store UNIQLO. The artwork was to be used as part of the Spring/Summer 2015 UNIQLO UT Omiyage World Souvenir range. The agency gave him several city and country names from around the world and he was to express a quality of that place through the lettering.

He was commissioned to create a line art sketch of the BOOM! in a way that could be modelled and 3D printed as a prop for an advertising campaign for uBank.

the two images above are the sketches he did for ubank. The first one was his first thought and then evolved into the second image. 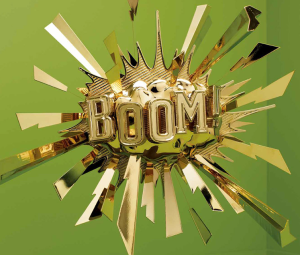 The image above is the final 3D model Ubank used.

Laura Meseguer works worldwide, with her projects focused predominantly on lettering and type. The outcomes of her works are based upon close collaboration with the client and the needs that must be met, in order to approach a design solution.

Meseguer’s designs range from whimsical to uniform, however, they’re all entertaining to view and skillfully composed. Despite how creative some of her lettering (E.g.  Guapa, and Magasim), they infrequently stray from readability, rarely disrupting the flow at which the words are read. Meseguer will regularly combine an existing style with minor alterations, or combine two existing typefaces that are present within the identity of the company (e.g. HET PAROOL, and Multi).

Meseguer’s letters capture a range of different moods; sets of typefaces extend from playful, to straight and strictly serious. Occasionally a typeface will covey multiple tones all within the same set, yet without being wild in its execution.

When commissioned to work for IN TRANSITION’s new environmentally friendly material ‘grow’, they insisted that the design consists of non geometric shapes in order to portray an organic formation without any rigid/geometric shapes and textures. The result, as seen bellow, expresses that exact notion of an organic structure, with rounded edges and bold black lettering to enforce a statement of substance, also the notable resemblance of the ‘R’ to that of a sprout.

The love for her craft is readable in each letter she creates. This passion is reflected in her advice for new designers and illustrators that wish to produce work of a high quality “Always work on projects or side-projects that [make] you happy, because [it’s] not possible to understand graphic design, illustration or type design without passion.”